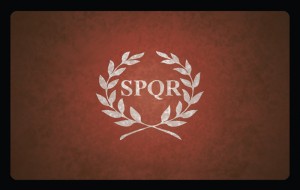 Rome changed, improved and expanded itself in an astonishing way between the centuries III to I bc. Its armies stood out compared to those of other clans and neighbors. Usually Rome deployed its light infantry in the front of the formations, being the most veterans and aged soldiers in the back. Velites were deployed first, skirmishing they attacked and fell back through the gaps in the formation that were closed quite fast. If the Hastati had to fell back as well, then the Princeps replaced them and if those were also defeated or needed to rest the Triarii used their spear formation to protect the rest of the army in case of a retreat.

A Roman legion in this period had 4200 infantry men and 300 horse riders. The richest men were usually part of the cavalry. They were 10 units or turmae with 30 horse riders each, leaded by 3 decurions (10 leading men).

Infantry had manipules with 120 soldiers or 2 centuries with 60 soldiers. Except for the triarii that had just 60 soldiers. Quite often a legion had different auxiliary units supporting them. They came from their allies and were 2 legions together (named Consular army). They were used mainly in large campaigns.