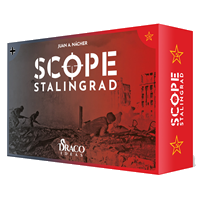 We want to incorporate a new game into our catalog: SCOPE Stalingrad, by a novel author, Juan A. Nácher. This game excited us from the first moment thanks to the speed of the game, the feeling of putting yourself in the boots of a sniper and the simplicity of its rules. 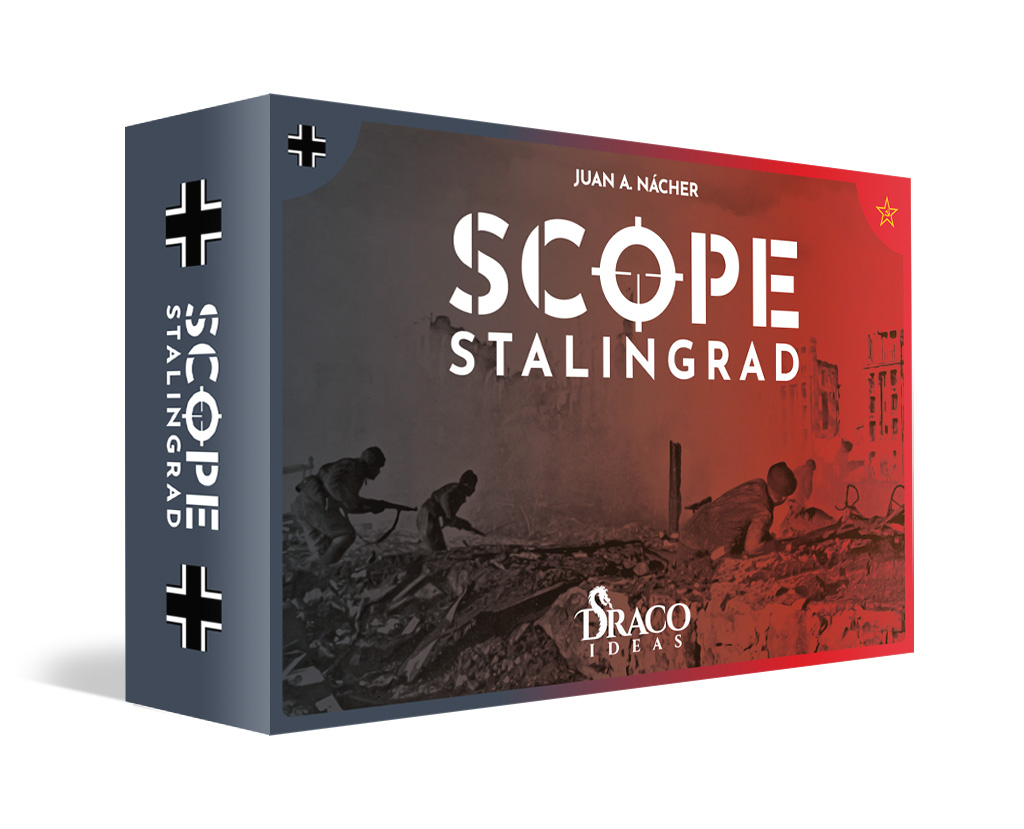 SCOPE is a 2 to 4 player game, set in the Battle of Stalingrad, where players take on the role of sniper on both sides. The objective of the game is to eliminate the enemy snipers or enemy troops for a total value of points depending on the scenario being played.

A fast and immersive game of 5-15 minutes per match, with various levels of difficulty and rules that are explained in two minutes on the clock. When you try it, you won’t be able to stop playing it.

SCOPE is a game of strategy, cunning, and bluffing that will make you feel like a real sniper, searching and selecting your targets well, then shooting and changing position so as not to be discovered and eliminated.

The year is 1942, World War II. Germany and The Soviet Union fight fiercely for the control of a ruined Stalingrad. In this merciless urban combat, snipers from both sides have a decisive role, spreading chaos and shooting down priority targets in the enemy front.

SCOPE is a thematic card game in which each player controls a sniper team that must eliminate the rival sniper team and other strategic objectives, looking for targets, changing position and shooting wisely to not be discovered and eliminated.

GAME SET UP: each player places their Area Cards face down, in a rectangular matrix that forms their Front. You can arrange the cards anywhere. The number and type of cards depends on the chosen Scenario. A player can look at their cards whenever they want during the course of the game.

OBJECTIVE: The player who first eliminates all the Snipers of the rival team or who first reaches the Objective Points of the chosen Scenario wins.

Two players alternate turns during the game. In a turn, each player must perform only one of the following two actions:

MOVE: the player takes the 4 cards of any Quadrant (group of 2×2 Area Cards) from their Front, and rearrange them as they wish in the same Quadrant.

SEARCH: The player reveals an enemy Area Card. If the card contains a Sniper or Unit, the player can Shoot and eliminate it.

If you decide to Shoot, remove the Area Card and place it in your scoring zone. Then, place your Shot Card in the center of a Quadrant of your Front where there is at least one Sniper. The removed card is replaced by an Empty Area card of the same Front. If the revealed card is a Decoy the player is obliged to Shoot without removing the Decoy from the Front.

The Shot Card represents the loud noise of the shot. It is placed on the Quadrant from where the Sniper has Shot. It remains in that position until the start of their next turn.

Advanced Mode adds rules to the Basic Game, making it a more complete and challenging game experience. In this game mode, Unit Cards provide more actions to choose from in turn, so that the player has more options depending on the allied units present in the Front. Similar to the Basic Game, players can only use only one action per turn.

SNIPER: provides the SEARCH (and Shoot) action of the Basic Game.

SCOUT: allows to reveal two adjacent cards without being able to Shoot.

MORTAR: reveal an allied Mortar position to attack and eliminate any card (also a Decoy).

INFANTRY: can invade the enemy Front and return as reinforcements after being eliminated.

ASES DUEL: a confrontation between only two Snipers with special rules.

BREAKING THE CHAIN OF COMMAND: the priority is to eliminate all the enemy Officers.

NEUTRALIZE ARTILLERY: all enemy Scouts and Mortars must be eliminated.

STOP THE ADVANCE: the goal is to stop a massive infantry assault.

OFFENSIVE WITHOUT SNIPERS: battle without snipers, only with the rest of the military units.

In 4 Player Games each side is divided into Snipers and Units. So that each player controls one of this Divisions. It is played by teams. The round is divided into 4 turns, in which the corresponding player can only use an action from the cards of their Division.

In 3 Player Games a player leads the two Divisions on the same side.

Number of players:
from 2 to 4